The Brain in Your Stomach 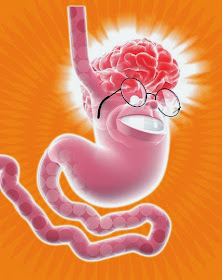 Did anyone ever tell you that
you have guts ? Did you ever
get a gut feeling ? Or have a
gut reaction ? Did some ever tell
you to "spill your guts"? Or that
they "hate your guts"?

If something is difficult or tough,
you either can't stomach it, and
give up trying; or you exhibit
"intestinal fortitude," meaning
you're tougher than the problem.
If you're a real dragon slayer,
someone might say you have a
"fire in your belly."

These expressions didn't just come
by way of happenstance. We have
a brain in our head that does the big
thinking, and we have a second
"Enteric Nervous System" in our
viscera. Scientists describe the latter
as being separate from the autonomic
nervous system, but it "receives
considerable innervation from it."

How many times have you heard
someone talk about the "head and
heart"? This is generally the same
concept. The head does the "thinking,"
and the stomach-brain does its best
to protect you.

Imagine you're walking along the
beach when suddenly you step on
something sharp. It could be glass,
or a nail, or just a piece of shell.
Before you can even look down,
some part of your being instantly
tried to remove your weight from
that object, even if it meant you
had to fall down. That's your "heart,"
or the nerve-center that's always
trying to keep you from getting hurt.
When you say the wrong thing to
your mom, or your best friend,
maybe that's your heart trying to
protect you from something too.

This ever-present "angel" looking
out for your health and best
interest is a real blessing. It gave
you butterflies when you were
not supposed to ride that roller
coaster, and it saved your precious
foot when you stepped on the sharp
object on the beach.

But as you grow older, it gets more
cautious. It shortens your steps to
make sure you don't fall, and starts
to suggest more and more that you
don't take risks. It wants you to sit
more and walk less. It wants you to
avoid the crazy stuff.

This also seems beneficial, but the
reduction of movement takes a real
toll on the body. The joints gets very
stiff without the full range of movement.
Bones literally start to fuse together.
Then when you slip on the ice, or
step on that sharp object on the beach,
you lack the skills to keep from
hurting yourself.

When I started Tai Chi in 2003, I could
feel that my "heart" or brain-stomach
did not want me to move in that way.
It resisted. But I followed the instruction
of my teacher, and over-rode my
stomach's resistance. Gradually and
gently, I began to reorganize my body.

The scar tissue in my ankle starting
going away, and my right knee fixed
itself. I went through myriads of aches
and pains that started and ended in less
than a week. And the aches were always
in a different place. It's been weird.

Now after more than 10 years of practice,
my head-brain and my stomach-brain
are in great alignment. I think they even
talk to each other.

Tai Chi looks slow and dumb, but there
is just nothing like it to reorganize and
fix your body. That's why they say it's
the fountain of youth.
Tai-Chi-Tommy at 2:45 PM